What is a Dumbbell Plot? permalink

A Dumbbell Plot is a variation on the Lollipop chart and is often used as an alternative to the traditional clustered bar chart.

It's made up of dot plots with two or more grouped series of data. The distance between the dots illustrates the difference between your two data points.

When would we use a Dumbbell Plot? permalink

Simple answer is: when you get bored of looking at the same old clustered/grouped bar charts. I'm far from a visual artist when it comes to data visualization but even a dyed in the wool coder like me knows that you have to mix things up every now and again.

Real world examples of when to use the Dumbbell Plot are:

I'm going to use Python to work up an example of a Dumbbell Plot. We'll use the Pandas and Matplotlib libraries to help build up our dataframe and the Dumbbell Chart.

I'm using a Jupyter Notebook to code in and Simple Analytical mailing list subscribers can get the finished product from my Github repo. 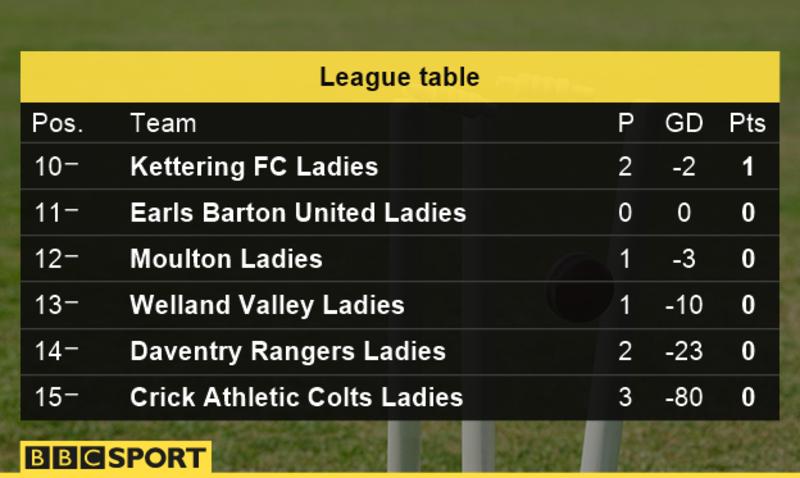 Football fans tie themselves up in knots over their club's league position at the end of a season. Judging whether a certain league position is "deserved" is very much a matter of subjective opinion. One measure we can use to work out an expected league position for each club is based on their annual wage bill.

Unlike American sports, there is no salary cap in football. Clubs can pay whatever they can afford to their playing staff. And we are going to use the English Premier League wage bill rankings to judge whether a certain club has been under or over-achieving for the past twenty years.

I am a Tottenham Hotpsur fan so we'll use Tottenham as our example subject.

Where do we get the data? permalink

The Telegraph and Guardian newspapers have ran annual articles rounding up the financial affairs of English Premier League teams. I used these as a secondary source while they often take their numbers straight from the clubs' own reported accounts or the annual Deloitte Football Finance report.

We need a grouped series and two (or more) values to compare to each other for our Dumbbell Plot. Our series will be the season (named SEASON, in the format like 20002001 for the 2000/2001 season). And our two values will be a wage rankings position (WAGEPOS) and a league finish position (LGEPOS).

Which gives us this dataframe: 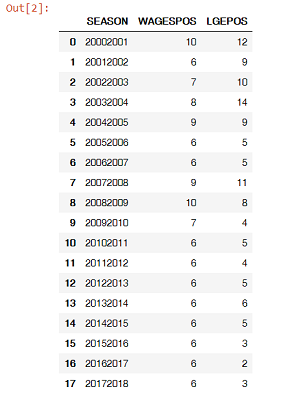 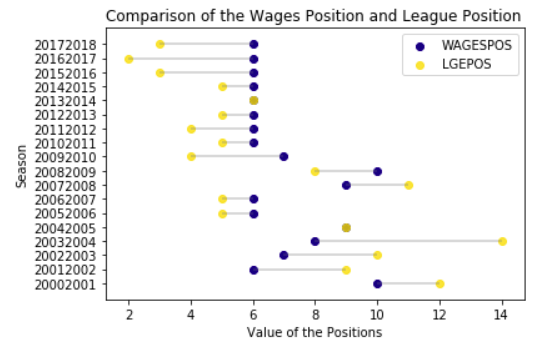 What does the chart tell us? permalink

Let's put our business analytics hats on for a second.

We started out wanting to know if Tottenham had been punching above their wage bill weight with regards to their league finishes. And it's pretty clear that they have.

From our Dumbbell Plot we want to see the GOLD dots further to the left of the NAVY BLUE dots. And that has been happening pretty consistently from at least the 2008/2009 season onwards.

The navy blue dots for Wage Ranking have been incredibly steady in sixth position for the best part of the last decade. This means that any league finish over or above 6th should be looked at as a win for Tottenham fans.

Are there other ways to chart this type of data? permalink

Yes indeed there are. As I said at the top, we could use the more traditional clustered bar chart approach. Or even a line chart to show the same data.

This is a quick clustered bar chart I did with the same data in Excel: 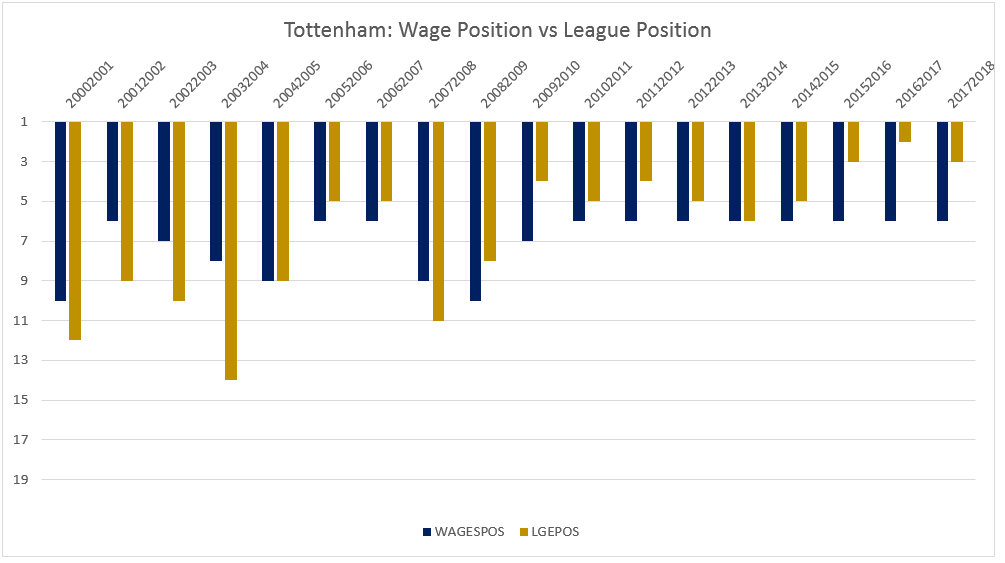 Having the desired position (at least in league position terms) being value=1 makes aligning this chart a little more difficult. As a reader, it doesn't convey the message to me as quickly as the Dumbbell Plot and that's what really matters.

I like the Dumbbell Plot better as it displays the differences more clearly between expected and actual values. It's well worth trying out on your business data to see how it looks for your own use case.

And of course it brightens up a slide deck of the same old bar charts if you fancy a change.